Pay 30% Until Handover This Year

If you live for having it all, then welcome to MARASSI PARK!

ADDRESS and EAGLE HILLS DIYAR have created an outstanding, first of a kind Serviced Apartments.

Marassi Residences is the first premium residential offering launched, with 1, 2 and 3-bedroom apartments directly connected to Marassi Galleria. Residents will enjoy its prime location, panoramic sea views and access to the podium.

Four residential buildings with 243 units offer a wide selection ranging from studios to three bedroom apartments. Lined with 900 sqm of retail space, the boulevard faces Marassi Galleria, and is within walking distance of the waterfront promenade.

Marassi Al Bahrain is a highly distinguished urban project, which combines a cohesive mix of residential and commercial properties, aimed at creating a sustainable township in Bahrain. Developed as a joint venture between Diyar Al Muharraq, one of the leading urban developers in the Kingdom of Bahrain; and Eagle Hills, this project is the first collaboration between the two leading urban development companies for the Kingdom.

Situated on the southern island shores of Diyar Al Muharraq, the development will feature two kilometres of waterfront and pristine sandy beaches, and will be among the most publicly accessible in the Kingdom. 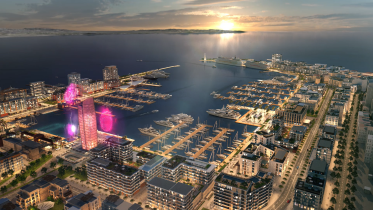 MARASSI AL BAHRAIN GEARS UP FOR PARTICIPATION IN CITYSC...